We’ve come a long way since women’s lingerie was referred to as unmentionables, or have we?

Most recently, the shopfront of Bras N Things in Campbelltown’s Macarthur Square shopping centre had been labelled as“disgusting and offensive” by local Councillor, Cindy Cagney.

Speaking to the Macarthur Chronicle, Cindy said, “You don’t see that type of lingerie and poses on daytime TV.”

“It’s an unrealistic view of women and to me it is sexually suggestive. I don’t think it is necessary.”

She goes on to spotlight the issue as an irresponsible representation of body image and contentious depiction of female sexuality.

The size of models used in mainstream advertising is a conversation that unquestionably needs to happen, but the amount of clothing worn by that model should not be part of the discussion.

Women should be allowed to celebrate their sexuality, to feel beautiful and confident. Lingerie has a unique power to do that, no matter what your size is.

It would be unrealistic to think any person looking at this type of advertising would feel pressured into wearing their underwear as outwear because, lingerie is for the wearer, not the starer.

Underwear can give us confidence while being completely hidden and it can empower women to feel confident in showing off their bodies. 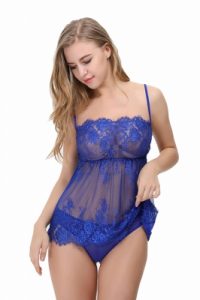 An actress who dressed her two-year-old daughter in white lingerie for Halloween, has been criticised on social media where she posted images and videos of the toddler in costume.

Terri Kwan dressed her little girl in white suspenders and underwear, including a bra, and fitted her with a pair of angel wings. One image shows the toddler holding a star shaped wand, with a lollipop in her mouth.

The Taiwanese actress added hashtags alongside the image including “Victoria’s Secret Model”, a reference to the lingerie maker which often uses scantily clad models to advertise its products.

The 41-year-old then shared the video and images with her 340,000 followers on picture sharing site, Instagram. She also put them on her Weibo account, a Chinese platform similar to Twitter, where she has 240,000 followers.

Taiwan’s cable news channel TVBS news reported that the costume was for a Halloween party at her daughter’s birthday party.

After she posted the images users were quick to condemn Kwan for her choice of costume.

One, Vannarocha7 called it “horrible horrible” and claimed the images would encourage paedophiles.

Another Loretta.rodgers10 called the images “disgusting”. They added: “Why would you do this to your daughter? Please protect her.”

The underwear manufacturer china official launch of Thando Thabethe’s lingerie line has finally arrived‚ five months since she first announced that it was in the works. And‚ she’s shared some sexy snaps featuring the equally bootylicious Sbahle Mpisane.

Taking to Instagram‚ Thando shared her excitement ahead of the official launch tonight.

“The day has arrived… (I’m) so excited for the launch of my brand new baby Thabootys underwear & shapewear… Thank you for sharing your beautiful stories that you believe make you a woman‚” she said.

Thando told TshisaLIVE earlier this year that she was inspired to launch a line of sexy underwear after struggling to find anything to give her body “the right shape”.

“I struggled to find any proper shape-fitting underwear locally and was having to import. Sure‚ you can find some but they often look like granny panties and I wanted something a little more sexy. So‚ the idea really comes from my own personal experience‚” she said.