From Paris Hilton (of course) to Kourtney Kardashian, plenty of celebrities are guilty of stripping down instead of dressing up for Halloween. Now, let’s get something straight, we’re not inherently against the idea of sexy Halloween costumes. Like, there are sexy Willy Wonka costumes that we rocked in college, and we wouldn’t take those memories back (if we could remember them in the first place). Likewise, we understand that not everyone is a huge fan of the holiday and wants to go all out like they’re attending Heidi Klum’s annual bash. People get lazy with their costumes and don’t want to spend money on something they’re only going to wear once.

But celebrities have plenty of money to spend on costumes and the probability of them actually going to a party with Heidi Klum is much higher than the average person’s. So if they’re still dying to go the sexy Halloween route, then it just feels like they should be trying a little harder than tacking on a few strips of lace or latex and topping it off with a witch hat. They shouldn’t be putting on a Victoria’s Secret babydoll and calling it a day. Or so you would think.

Surprisingly (or not), plenty of stars have gone the sexy lazy route and have thrown on legit lingerie before stepping out and getting snapped by the paps. Whether or not they already owned the undergarments is up for debate, but regardless, we’re not impressed. And frankly, we feel a little offended by the lazy attempt at a sexy costume. Where’s the creativity people? Sheesh. 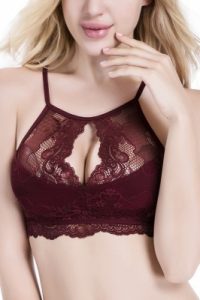